Home Highlight About the Ruling pen

About the Ruling pen 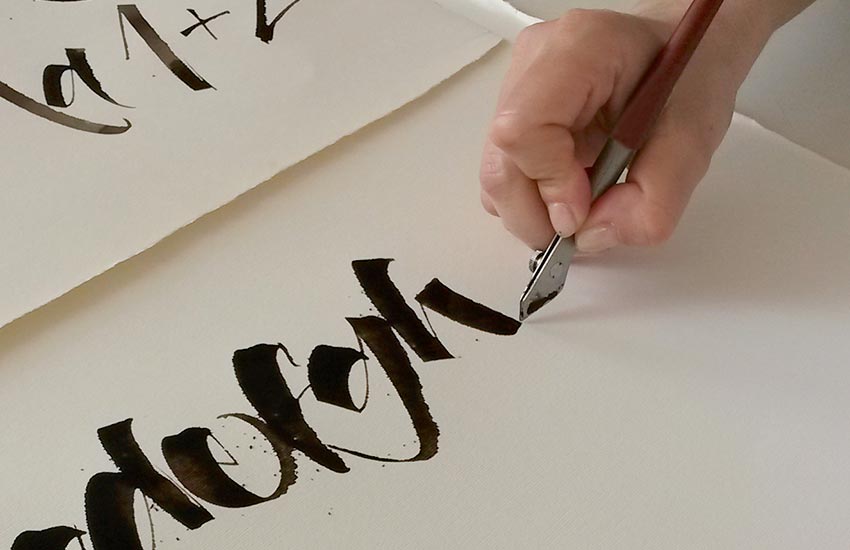 This ruling pen is designed by Handwritmic and Brody Neuenschwander has lent his name to it. He describes it as “Magnificent! Fabulous! What a joy to write with! It makes the most beautiful splatters, feels good in the hand, is a lovely object to see”.

This pen has an original asymmetrical shape, that breaks away from the well-known classical ruling pen, also named “ruling writer”.

It was Friedrich Poppl (1923 – 1982), the German calligrapher and designer of the Poppl Antiqua and Laudatio typefaces, who first used a ruling pen for calligraphy in the 1950s.

However, the concept behind our Handwritmic Ruling pen is quite different. We have improved our pen with a new design and new materials, this pen is not made of brass but of Swedish stainless steel.

The result is a new calligraphy and drawing instrument with four functions: you can write bold, medium and thin strokes and you can trace and rule lines of different thicknesses holding the pen vertically.

Here is how it works: the edges make marks of two different widths, depending on which edge you are writing with. A thin line is made with the pen held more upright, with only the point touching the paper. With the full width of the two edges of the pen touching the paper the arm can be moved in any direction to make strokes of equal width as in Neuland. Alternatively, the angle of incidence of pen to paper can be changed (together with arm movements) in order to obtain intermediate strokes.

The screw is used to vary the gap between the two metal blades, and thereby reduce or increase the width of the thin lines when the pen is hold vertically. Remember that it’s original function was that of ruling lines of different thicknesses with Indian ink or goauche for making technical drawings or borders.

The pen must be dipped in the ink quite generously. Don’t be afraid of smudging it: this pen can be washed very easily under water.

Of course, writing with this tool means it is impossible to use the normal angles (from 0° to 90°) that are applied to formal calligraphy. New techniques must be explored, with different directions and angles (even opposite angles) and various arm movements. Don’t underestimate the speed nor the variations in pressure! This is the perfect tool for expressive or even wild calligraphy. Splatters will occur quite naturally but they can also be induced by quick strokes from bottom to top (pushing instead of pulling the pen) or by slow and heavy movements or by writing on rough paper.

What does handwriting mean to you?

Manage Cookie Consent
To provide the best experiences, we use technologies like cookies to store and/or access device information. Consenting to these technologies will allow us to process data such as browsing behavior or unique IDs on this site. Not consenting or withdrawing consent, may adversely affect certain features and functions.
Manage options Manage services Manage vendors Read more about these purposes
View preferences
{title} {title} {title}